Background information:
After the war ended in South Syria, members of the opposition agreed in July 2018 to the terms of a settlement sponsored by the Russian Military Police, which supports Syrian regime. Left with no other choice, they thought that doing so would protect them from the regime’s security forces, which had recaptured the region, many of Dara’a Governorate residents refused to be relocated to North of Syria and reconciled with the Security Forces.
Those who were part of the Free Syrian Army went under a newly and specifically formed military group called the “5th Corps” supported by Russia.
Worth noting that the GoS still see them as enemy to the state despite working alongside the Russian forces.
The 4th Division supported by Iran is heavily involved in Dara’a. They are seen as the most brutal division in the army.
Few days ago and during one of the meetings between the Dara’a Central Committee, Russian representatives and GoS Secretary of Defence; the lateral stated that the 5th Corps is an enemy to the state and should be fought which did upset the Russian who made strong statement.
Dara’a city split into 2 parts; one part under the control of the GoS which is the Security and Administrative quarter whilst the 2nd part called “Dara’a Al Balad” remain free from any presence of Security Forces but surrounded by checkpoints and access through few crossing points into areas controlled by Security Forces, On 24 June Syrian government and its allies imposed a siege on Dar’a al-Balad, they used light and medium weapons to secure the area and established several checkpoints on the city’s sides, mainly on the northwestern, western, and northern sides.
Even if the situation clams down now, fighting will renew in the near future between various army units supported by Iran and the 5th Corps supported by Russia.
Reports state that this is the price for refusing to vote in the last presidential election
There are currently 11,000 families / around 50,000 civilians affected by the ongoing besiegement 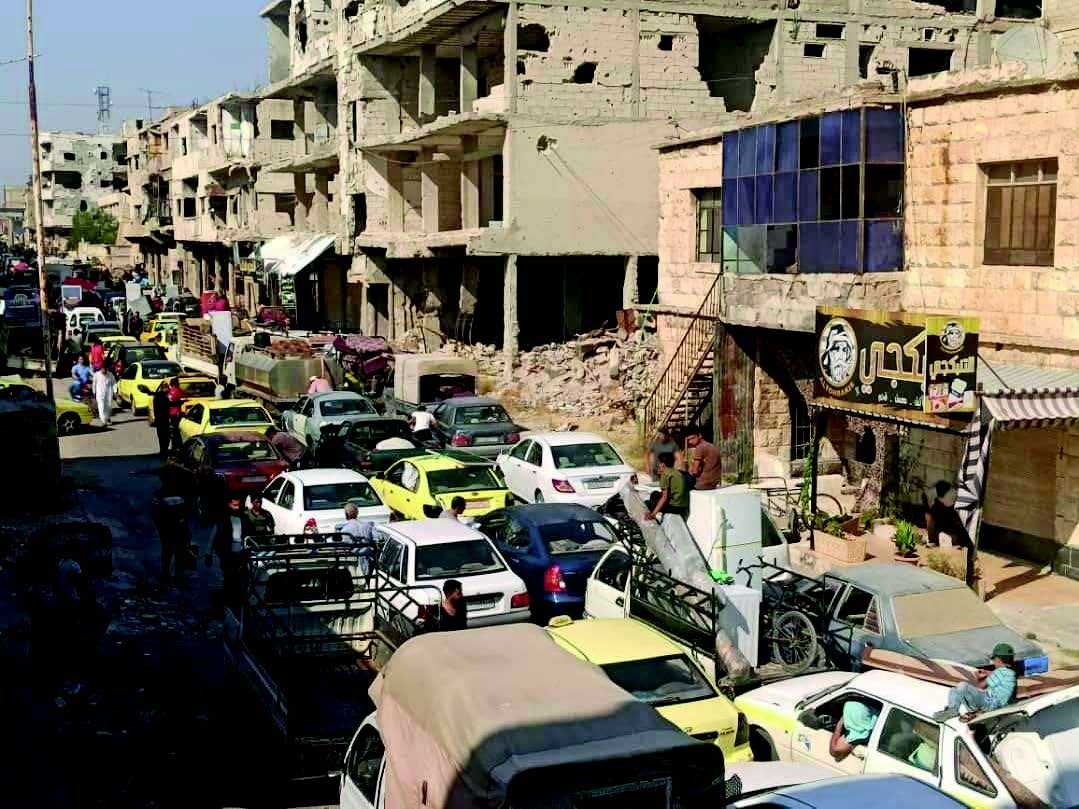 Humanitarian Situation:
The fighting across Dar‘a led to large-scale displacement from the governorate, particularly from Dar‘a al-Balad.. The displaced families are mainly hosted by local families, while several hundred individuals are residing in two collective shelters. Humanitarian aid, including food, healthcare, water, sanitation and hygiene services and non-food items are also being provided by humanitarian agencies.
local sources have reported on a shortage of food and medicine in Dar‘a al-Balad due to the siege in addition to the few medical facilities in the neighborhood being put out of order due to the fighting, making health care inaccessible for Dar‘a al-Balad residents both in and outside of their neighborhoods.
No medical points no clinics are left to treat injuries
No medical cases are allowed to be taken out for treatment
The area has been without water, electricity, flour and food for a long time.
Around 250 families are said to be besieged in farms and lands surrounding Dara’a in Al Shayah & Tal Al Sultan. They have no amenities nor nor and these are farm lands and lack any amenities nor food or drink. Members of the 5th Corps reached out to them with limited supplies and they were unable to free them or ease the besiegement on them.
The Russian don’t come across as keen on moving these families and their intentions are not clear.
Few months ago, UN Convoy was blocked from entering Dara’a Al Balad and intense negotiations took place before it was allowed in. Since then, no aid crossed neither cross-border which is not within the current UN Mandate nor Cross-Line if we assume Daraa Al Balad is a cross-line operation.
Over %80 are in need of humanitarian assistance and around %40 of them are desperate for food and drink.
Around 11,000 families or 50,000 civilians called for them to be relocated to NWS but their request was refused and this means only one thing; evil intentions.
The Russian guarantor seem to be at friction with their allies and government forces supported by Iranian militias.
The absence of any assistance from UN agencies based in Damascus or by SARC or ICRC means they are left alone like we did in the past with Madaya, North Homs Countryside and many other towns and villages in Eastern Ghouta
When we look at the list of names of civilians killed cold blooded; you only read names of women and children
Daraa Reconciliation committee sent a reminder that they asked to be relocated to NW Syria
We want to live peacefully and they are refusing
GoS did offer few weeks earlier the opportunity for civilians who choose to leave and they will provide them with busses and facilitate the displacement
Dara’a committee even asked to be moved to Jordan
Families were prepared for the besiegement and now that they consumed all they saved, you can witness the suffering
No one is able to attend their workplace
No food nor vegetables are allowed in
No UN aid was allowed in as well except with limited supplies and following intense negotiations

Security Information:
The deployment of Snipers and the targeting of any movement, plus attempts to break into the city from various locations alongside the sheer use of force means the break into Daraa Al Balad is imminent
There are claims to say that the GoS Secretary of Defence did agree in the past to provide busses and access to those wanting to leave Dara’a.
The same Minister is no refusing to let anyone outside Dara’a claiming any lives lost is a price worth paying.
GoS are prepared to bring families from outside Dara’a and locate them in the city.
Over a month ago GOS forces closed all crossings except for one and started negotiations where an agreement was reached and arms were handed to GoS forces alongside individuals wanted by the Syrian Intelligence.
The original agreement was to put 3 security checkpoints outside Daraa Al Balad but on the 27th July at 05:00 there was an attempt to break into the town from the east and south by the 4th Division breaking the ceasefire and any agreement.
Properties were looted even electricity transformers
They insisted on putting more checkpoints around 12 were installed whilst the original agreement was 3
These checkpoints break the town into areas and makes it impossible to cross from one neighbourhood into another with constant threats of breaking in
At some points there was an agreement for these to be manned by 5th Division soldiers 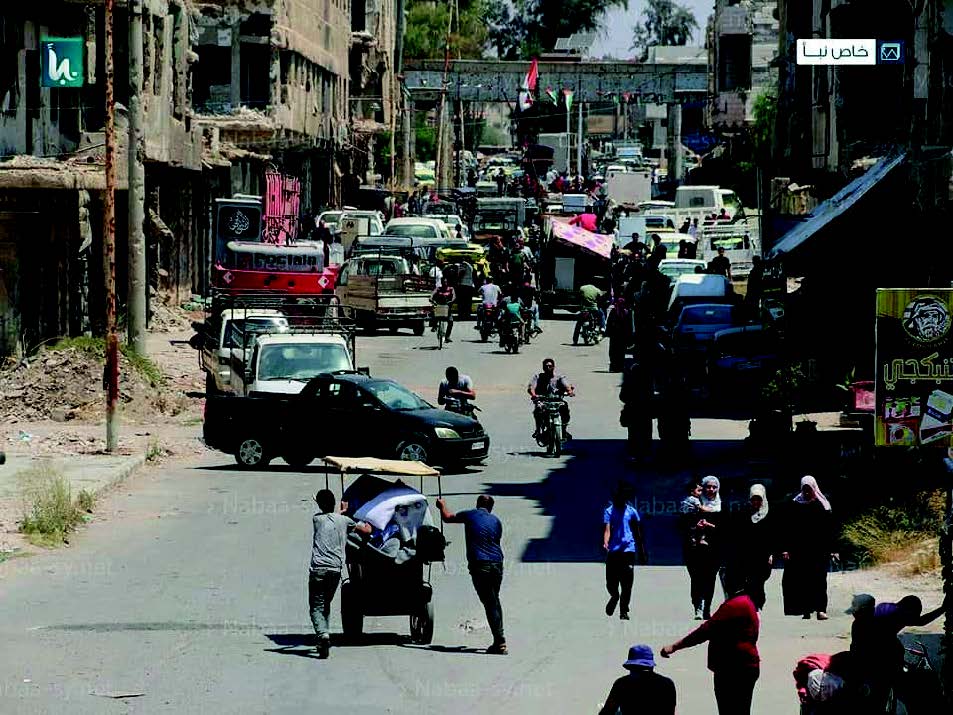 The possibility of intervention and implementing projects in Daraa governorate:
Since the month of Ramadan, Horan Foundation has activated its crew, which form several teams across of Horan region. Horan team is distinguished by having extensive experience during the war in Syria.
Also those teams’ have implemented projects in many circumstances since 2011 and they obtained many training courses and capacity building programs that contribute to the implementation of humanitarian work in accordance with the approved standards the principles of humanitarian work.
Also they have a high level of experience in the institutional, organized and legal work through the work in Horan Foundation, which contributes to providing documentation compatible with the requirements of the various donors.
The importance of the contribution of humanitarian organizations in the emergency response campaign:
As it is known to everyone most of the Syrian people are now living below the poverty line and most of the income-saving assets have been lost and many families especially those who have lost their breadwinners or those who have vulnerable people.

This description currently applies to approximately 56,000 thousand people who are in imminent danger, most of them are children and women. In such times, these families are waiting, as they are relatively used to do, the arrival of humanitarian workers to provide assistance to them. The people of the region still believe that the Syrian humanitarian organizations were found to defend their rights will be on their side in these difficult circumstances.
There is no doubt that the participation and contribution of organizations in the emergency response plan will be a good aid for them in their steadfastness in order to achieve their rights to a decent life, and it will also be a documented witness that this regime is unable to provide humanitarian aid .
Organizations’ contribution in the emergency response to Daraa reinforces the position of the Syrian organizations and their supporters on the importance of renewing Security Council resolutions related to cross-border aid and finding permanent mechanisms to remove aid from the of the regime. 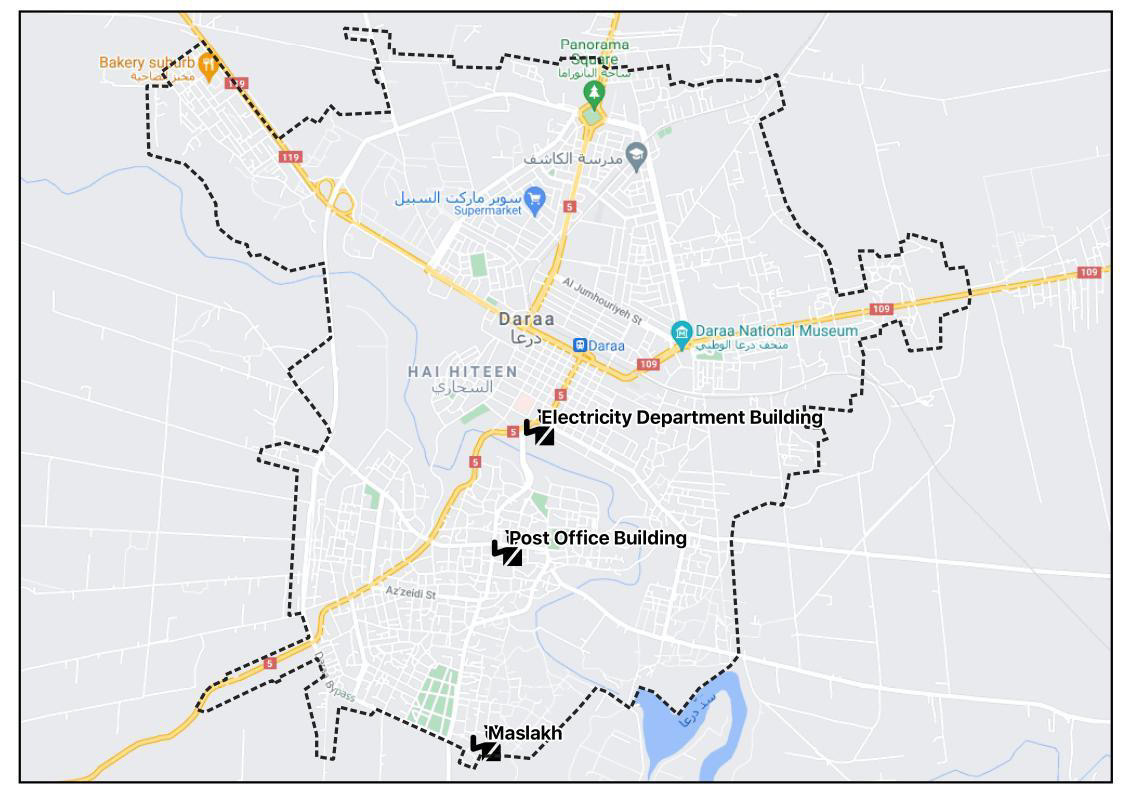